Now Facebook has also released their own dialer app for Android called Hello, which lets you make free calls and send texts using Facebook Messenger and your contacts on the world’s largest social network.

You won’t need to have contacts saved on your phone for Hello to work either. It just needs you to sign into your Facebook account and then pulls all your contact data, showing you who’s calling. This caller ID feature doesn’t just work independent of your phone’s contacts, it also lets you block unwanted callers.

While there are several third party dialer apps that you can download to replace your phone’s stock dialer, Hello stands out because of its Facebook integration, especially with Facebook Messenger, allowing you to make free calls and send messages to your Facebook friends on the go.

The app also automatically updates all your Facebook contacts’ information so you don’t have to worry about missing birthdays or not having the latest contact details for your friends.

You can download the free dialer from Google Play Store using the link below. However, it’s not available in all countries, in which case you may want to download the Hello dialer APK (also linked below). 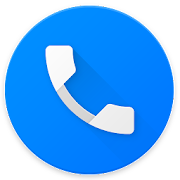 What do you think about Facebook’s new dialer app for Android? Will you be replacing your stock Android dialer with this? If so, we’d love to hear your comments and experience. Meanwhile, you might want to learn how to install APK files directly onto your Android phone or tablet if you haven’t done so before.