Angry Birds Stella Pop, as the name suggests, is a bubble shooter which is available as a free download on the Play Store. You get to see your favorite female Angry Birds, Stella, Poppy, Dahlia, Luca, Willow and Gale rescue “exotic critters” from the evil piggies.

If you’ve played any bubble shooter before (you probably have), you will easily get the hang of this new title, but Rovio are sure to take some fire for the limited amount of lives in the game and the pace at which they regenerate. If you get stuck at a certain level and lose all your lives, you will have to wait till you get more.

According to Rovio however, the game features its own superpowered bubble combos, unlockable boosts and clever level designs which require strategy to beat. You will also face puzzles like Drop the Pigs and Beat the Clock where you have to meet objectives other than just popping bubbles.

Angry Birds Stella Pop also has decent graphics, a fun soundtrack, and is compatible with both Android phones and tablets. While you can download it for free below, there are in-app purchases. 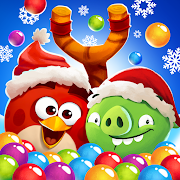 Recommended for you: List of All Angry Birds Games on Android